ULI Colorado’s annual holiday program attracted 175 who Zoomed from across the nation to explore the issues of gentrification and structural racism in real estate, along with potential paths toward equitable development.

Mark Marshall, Vice President of Real Estate for the Urban Land Conservancy, moderated one of ULI Colorado’s most diverse panels yet.

These issues have been magnified since the death of George Floyd last May and ULI’s placement of Diversity, Equity and Inclusion (DEI) as a top priority. As is becoming better known, structural racism in real estate has resulted from a combination of factors including federal policies, unfair lending practices including redlining, and segregationist private covenants, such as those practiced by ULI founder J.C. Nichols, who created numerous white-only subdivisions in Kansas City in the 1930s and ‘40s. Although many of these practices have been outlawed, their effects linger. As a result, not everyone benefits from reinvestment in cities and many communities and individuals have been harmed.

So where do we go from here? One of ULI Colorado’s most diverse panels yet explored the topics of displacement, lack of access to capital for people of color, the history of structural racism in real estate, and possible solutions like community land trusts, community benefit agreements, and community investment trusts.

Keynote speaker Prentiss Dantzler explained how practices such as redlining, racially restrictive covenants, and block-busting have created a huge wealth gap between Black, White and Latinx families. One reason is that homeownership rates among Blacks and Latinx lag far behind. At current rates of advancement, it would take Black families 228 years and Latinx families 84 years to catch up to wealth equity accumulated by Whites today. Too often a young person’s zip code will dictate their ultimate level of education, job opportunity, and economic stability.

As Dantzler communicated in a color-coded Metro Denver map, gentrification has exacerbated housing segregation by pushing communities of color into suburban pockets of poverty. Dantzler called for housing policies that do not emphasize home ownership over rentals. “It is not just about home ownership but also about neighborhood stability.”

He called for greater efforts to promote community engagement, and to expand the model of Community Land Trusts (CLTs) that stabilize land costs while increasing the value of properties around them, helping communities of color build wealth. At the same time he warned against such practices as predatory real estate purchases in gentrifying neighborhoods and the commodification of homes as investments.

Building more homes does not ensure equitable outcomes, Dantzler said, but he argued that Denver’s 77 percent single-family zoning excludes many by both race and class. Neighborhood planning can be much more inclusive. He highlighted Denver’s recently approved East Area Plan, which required communities with very different values to collaborate on common visions for their neighborhoods along East Colfax.

Quoting Martin Luther King, Jr., Dantzler called for a “revolution of values” needed to make this happen. He said, “We need to force market-actors to intentionally engage communities.”

How can development be done differently to create equitable outcomes?

The Urban Land Conservancy’s (ULC) Erin Clark showed images of Vina, a new 150-unit affordable apartment building in Globeville, one of Denver’s poorest neighborhoods. Several years ago, ULC bought the land for $5.5 million to “land bank” in a Community Land Trust. It recently appraised for $16.6 million. Stabilizing the land costs under a 99-year ground lease, ULC attracted a private partner to develop the project. It will blend of apartments permanently affordable to 30 percent, 50 percent and 80 percent of Area Median Income (AMI). Clark noted that the inclusion of some higher-AMI apartments subsidizes homes for lower-income residents. Click here for more information.

An attendee asked in the chat box: Can developers make money through equitable development?

Clark responded: “You’ll see [more of] the model where a nonprofit owns the land partnered with for-profit developers to build on it. To do development in the public interest, they still need to make money on the deal.

“We’re asking them to do more, we’re putting in goals for environmental sustainability, affordable housing, job creation, and really trying to dig in with communities to see what can help impact them in a positive way, economically and socially.

“Is it harder? Yes, but is it worthwhile because we are also recognizing that real estate is not just the general capitalistic thinking of ‘We buy low, sell high.’” 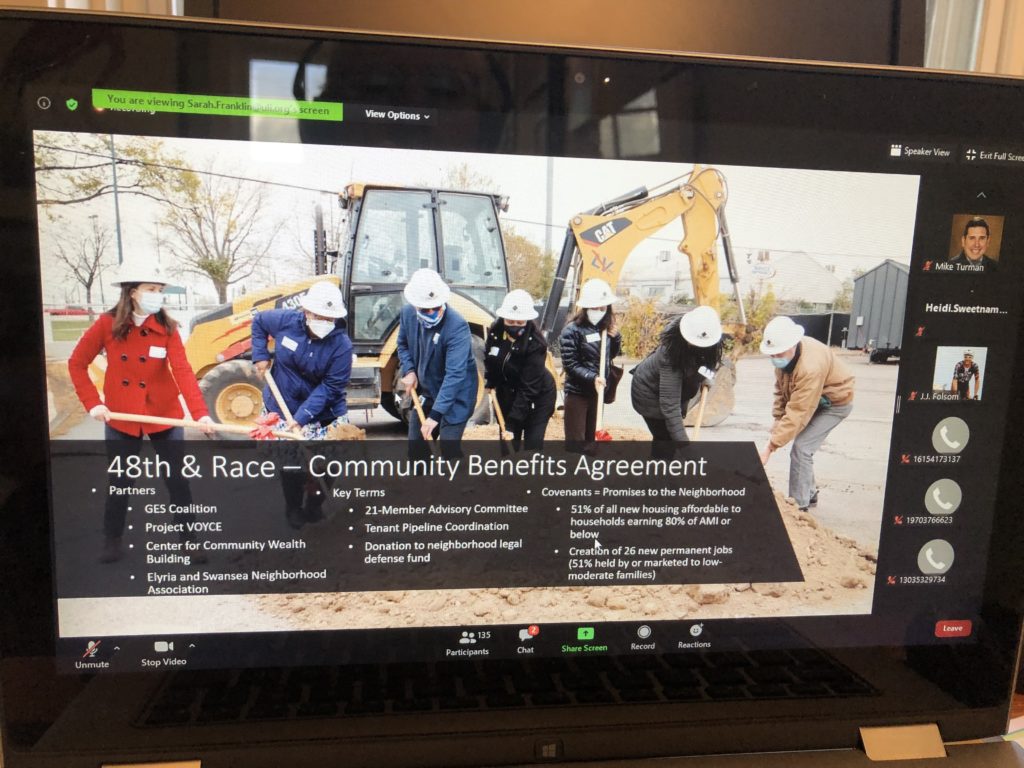 Erin Clark, Vice President of Master Site Development for the Urban Land Conservancy, explained the Community Benefits Agreement between ULC and the surrounding community for their project at 48th & Race.

Mark Falcone reflected on how the world has evolved since Continuum was founded in 1997 with equity as a core value. When pursuing work in center cities, “We were greeted with open arms. ‘Welcome: Finally someone is coming to invest in our neighborhoods.’” Today (as Danztler noted in his keynote) the opposite might be true, with long-time neighbors opposing improvements such a new parks and grocery stores as harbingers of displacement.

Falcone reported on negotiating a CBA for a 14-acre former Post Office owned by the redevelopment authority in Portland, Oregon. A framework plan envisions the site for as much as 4 million square feet of development to include 2,100 homes, one-third reserved as affordable.

“I’m not going to sugar-coat it,” he said. “These are hard problems to solve and they slow projects way down…. by getting it right. I think that we will create resilient communities that will win economically for years to come. But we’re going to run out of time if we don’t get after it sooner.”

Cowans referenced efforts to include long-time Five Points business owners in the neighborhood vision and profit from it in the long run. Click here for more information about the Five Points Business Improvement District. 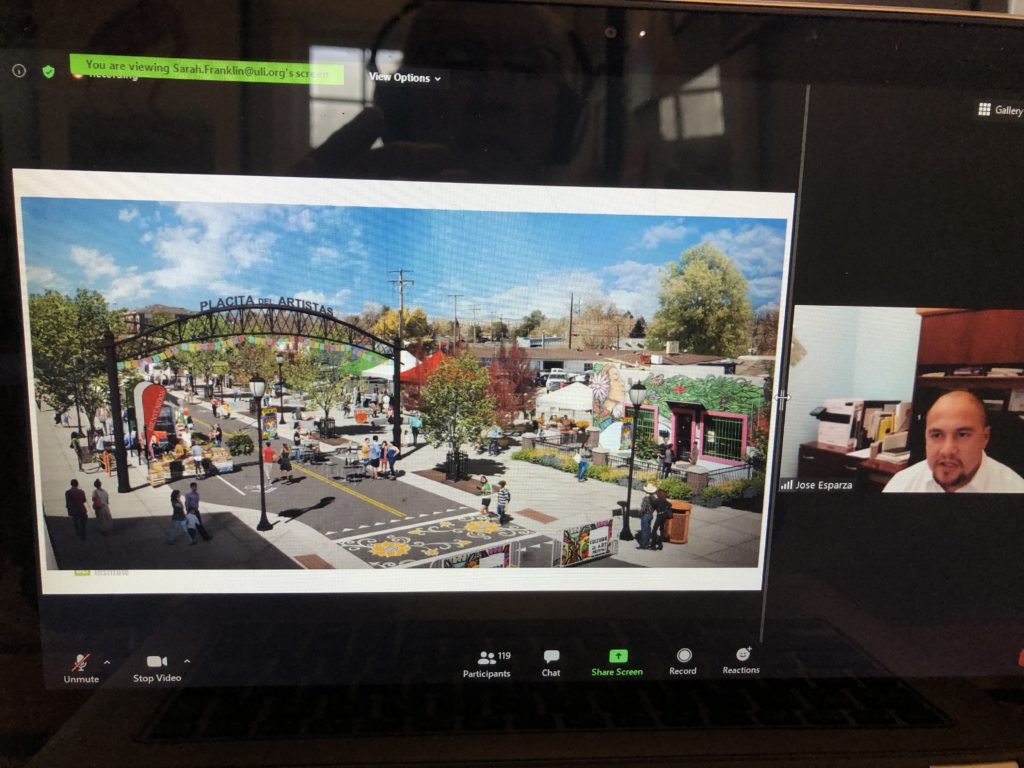 That is the cornerstone of BuCu West’s efforts to improve the Morrison Road corridor in Westwood, a mostly Hispanic neighborhood in southwest Denver. Jose Esparza noted that locally owned businesses do not always share the mind-set of applying for city programs for support. “You have to meet people where they are … it’s not always about upzoning to more stories, but about adaptive reuse and cultural sensitivity.” Click here for more information about BuCu West.

The panel also addressed such issues as little diversity in the land-use professions and lack of access to capital for minority developers. In future programs, ULI Colorado will explore these issues in depth while diving into case studies of how to plan, design, finance and build equitable development.

This event was sponsored by Polsinelli, a national law firm that includes 200 real estate attorneys in offices from L.A. to New York. Shareholder Amy K. Hansen said that Polsinelli’s commitment to diversity has resulted in an 82 percent increase in diverse leadership in the last two years. In its practice, the firm supports equity by focusing on Opportunity Zones and social-impact investing, as well as offering pro bono services for community development.

The event was planned by ULI Colorado’s Explorer Committee chaired by Bill Mahar of Norris Design and Michele Raftery of 4240 Architecture.

Click here to watch the recording of the program.

Recap from the "Homelessness: Local Solutions to a National Crisis" Webinar on 5/19/20.