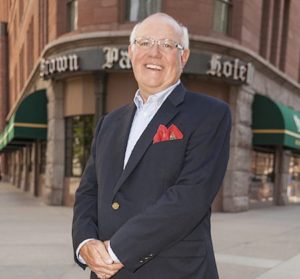 On July 1, Mike Zoellner of ZF Capital will become chair for the Colorado District Council of the Urban Land Institute (ULI Colorado). He succeeds Tracy Huggins, executive director of the Denver Urban Renewal Authority, who served in that role since July 1, 2017.

ZF Capital is a Colorado investment company focused on developing and acquiring multifamily and mixed-use properties. Before forming ZFC this year, Mike was a founding partner of RedPeak Properties (15 years) and Legacy Partners (formerly the western region of Lincoln Property Company) for 17 years. During this time, he developed and managed 70+ apartment projects in the region totaling more than 11,500 units. He is a licensed real estate broker in Colorado.

Mike is member of ULI’s National Multi Housing Council. Previously for ULI Colorado, he, chaired the 2008 National Placemaking Conference in Denver, served as a mentor in the Real Estate Diversity Initiative (REDI), and was a co-chair of the Multifamily Housing Council.

Among many other community activities, Mike also chairs the Colorado Multifamily Housing Alliance; sits on the Board of Directors for Citywide Banks of Colorado; is vice chairman of Downtown Denver, Inc.; and past treasurer of the Downtown Denver Partnership. Mike has a BSBA in Finance from Creighton University as well as a Juris Doctor degree from the School of Law at Creighton.

A fourth-generation Colorado native, Mike and his wife, Nancy, live in downtown Denver. They have three married children and a growing number of grandchildren.

During Zoellner’s term, ULI Colorado will host ULI’s global Spring Meeting, May 10-12, 2021. The meeting will draw 4,000 leaders in real estate and land use from around the world. This summer ULI Colorado will form a Local Arrangements committee to plan venues, tours, speakers and sponsorship.